Should I Choose an Attached Solar System or a Ballasted System? 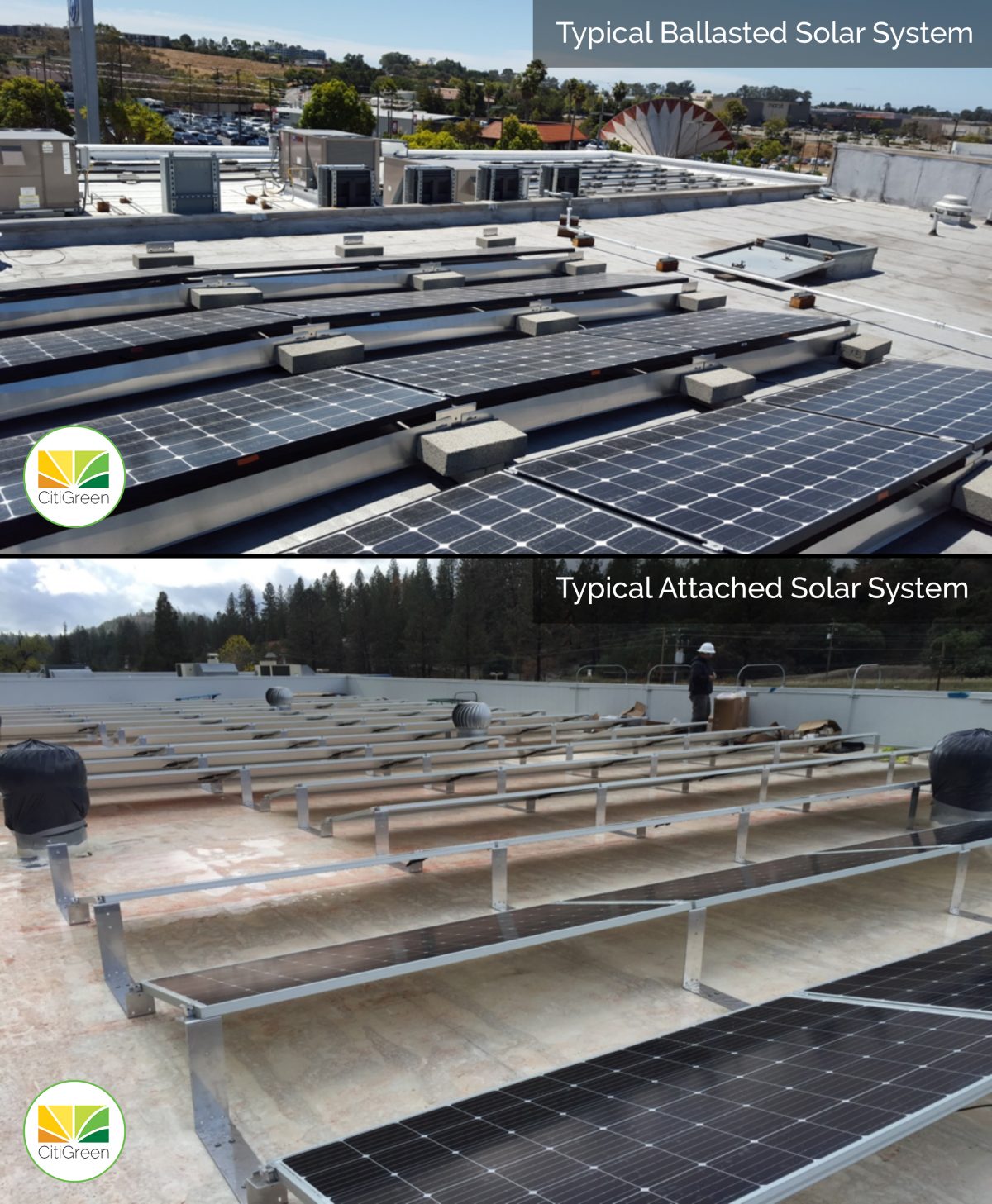 There are many companies proposing and installing solar panels on commercial buildings. Since many of these buildings are almost flat, it allows two basic systems to be used in order to hold the solar panels in position on your roof. These are called attached or ballasted. While the attached system may have more roof attachments and may cost slightly more than a ballasted system, the attached system will outperform the ballasted system in many ways, including providing a better return on investment (ROI).

The sun is not directly overhead. In PG&E territory in Northern California, it varies between 16 degrees off of vertical in the summer to 60 degrees off of vertical in the winter. Since the sun’s rays come straight from the sun to the Earth, it makes sense to aim the solar panels at the sun. You can do this with tracking systems, but the added cost and complexity does not pay for itself and we will not consider them for rooftop applications. The days in the Summer are much longer than the days of Winter and the cost of electricity is much higher in Summer, so it is beneficial to aim the solar panels at the Summer sun.

We have many solar design programs available to us now that will calculate the output from a typical solar system based on its size, location, orientation, tilt, number of panels, etc. From these programs, the most robust of which is called SAM from National Renewable Energy Labs, we can get very accurate comparisons between various angles for a given size of a solar system. From this information, we find that an angle between 15 and 20 degrees off of vertical is the best angle for output as well as roof density. The steeper the panels, the more they shade the row behind them, otherwise called inter-row shading. So as the tilt gets greater, we cannot fit as many modules on the roof.

There are three main differences between roof mounted attached and ballasted solar systems: weight of the solar system on your roof, number of attachments, and overall output per installed Watt.

The ballasted system weighs between 3 and 5 times more than a conventional attached system, depending on the anticipated wind in your area. This additional weight is enough to slowly but surely sag the smaller roof components, which will cause ponding on a commercial flat roof. This ponding is the first step in leaking.

Ever since the seismic engineering requirements were increased three years ago in most jurisdictions, the ballasted systems must have a little less than one attachment per solar panel in order to hold the panels and all the ballast in place in case there is an earthquake. A typical attached solar system uses about 1 ¼ attachments per solar panel, so there is not really much difference. In general, a ballasted system will have about half as many attachments as an attached system. The difference here, though is that with a ballasted system, the roof is a lot more likely to sag, causing pressure on these attachments which will be much more likely to result in a leak. Due to these new engineering requirements, the number of attachments may be increased so that the ballast is reduced, making the number of attachments very similar between the two types of systems; ballasted and attached.

The attached solar system will outperform a ballasted system in every way, with ROI being the most important and most significant. Additional roof sagging resulting in ponding is another drawback to a ballasted system, and if you have ever walked around a ballasted system on your roof, you will get very tired of stepping over cinder blocks. For a better system in the short and long run, go with an attached system.

Why Does PG&E Bankruptcy Raise Rates?

Does Solar Protect Me From PG&E Rate Increases?

How Does NEM 3.0 Affect Solar in California?

How Can I Reduce My Business PG&E Bill?

CitiGreen is in the business of saving property owners money on their electric bill. Starting with their power bills, CitiGreen designs an energy saving and generating program unique to every customer.

© - 2018 CitiGreen Inc.. | All rights reserved. Do not duplicate or redistribute in any form.